Courtesy of AMD (thanks Marco!), we have a couple AMD EPYC Rome 7502 series CPUs for our systems we plan on Azure Stack HCI certifying! 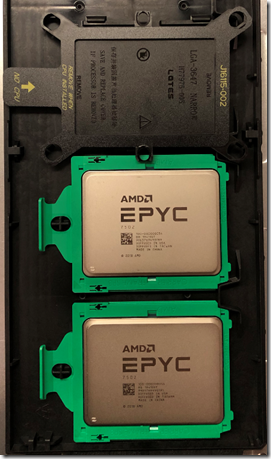 In the above image we laid an Intel Xeon Scalable socket cover above the AMD EPYC Rome processors to compare their sizes. They look pretty close.

To date, we’ve not seen much of an Intel CPU price decline in the System Builder Channel. But, prices are sure to come down given AMD’s prices being substantially lower.

We’ve been doing a lot of planning around incorporating AMD EPYC Rome into our solution stacks and with good reason.

The new processor’s feature set are currently second to none:

We have two TYAN 2U AMD EPYC Rome single socket servers in the shop. We will be building them out soon with the goal being to Azure Stack HCI certify them.

We plan on posting more about our journey to an AMD Azure Stack HCI platform!

Note that we know there will be a few hoops to jump through before that happens. We plan on getting through them. 😉

We see a lot of potential in the AMD product coming down the pipe and are looking forward to working with key AMD Platforms in our Proof-of-Concept labs.

As an FYI, we use the following grid for quick reference quite a bit: 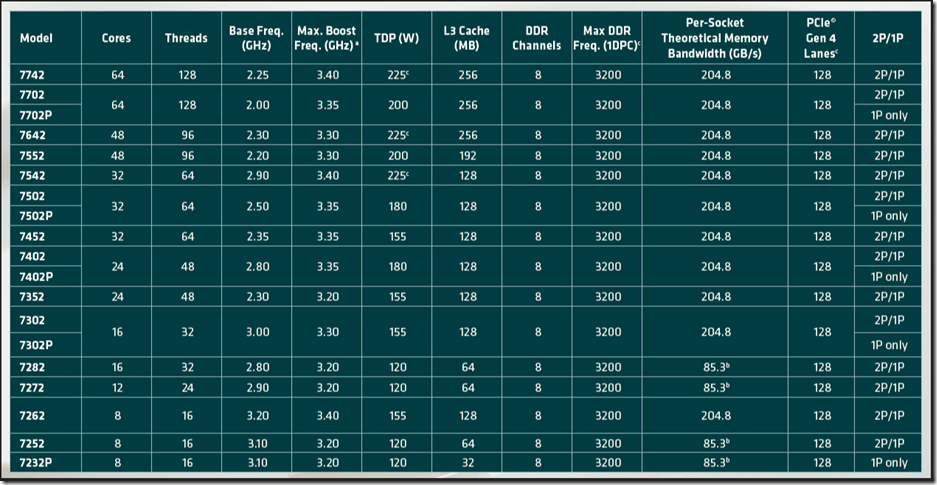 Merry Christmas and a Happy New Year to all y’all! 😀

TYAN has an excellent built-in Remote Management Module (RMM) that does not require an extra license like some Tier 1 vendors do. […]

We just completed a workstation board swap of an ASRock TRX40 Creator board that was set up with an Asus HYPER M.2 […]

Server and workstation boards have had SlimSAS 8x connectors for dual NVMe drive setups for quite a long time now. ASRock Rack […]

We’re in the process of building an AMD ThreadRipper based system. One thing to keep in mind when it comes to either […]